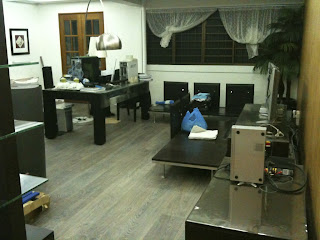 The day finally arrived when we have our home back to its clean and comfy condition.

After tolerating with the mess, the dust and disarray since last Tuesday, and after toiling with Wifey and Sonny for the rest of the week, we can finally rest and call it our home, sweet home again.

We had our home floor renovated.

It sounds simple but renovating an already lived-in home is a total nightmare. We did the flooring of the entire house except the ceramic tiled kitchen and our two bathrooms. The entire laminate flooring we had installed since the first day we moved in about sixteen years ago had seen its days way and was ready to be replaced.

We replaced it with the same type of flooring, not ceramic tiles or marble slabs but with a Belgium made laminate flooring called Balterio. This new type of laminate technology may be known in Europe but is very new in this part of the world. The contractor told us that we are the first home to install it in Singapore! We feel special nonetheless, however true that claim may be. 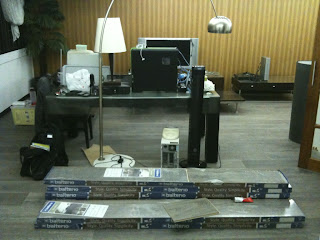 The whole house was "ransacked." Contents from furniture and our wardrobes had to be taken out for the contractors to shift them around. They pried open one end of the room and laid new flooring and then moved the furniture to the other end of the completed area to start prying open the old flooring to lay new ones.

It was repeated from one room to another, starting with our living room, then the bedrooms where they spent a longer time "maneuvering" around the built-in wardrobes. But the worst was the store room.

We knew we had lots of stuff in there but never thought it could fill up two rooms' floorspace!

We are Malays but felt we were so much more busier than the Chinese folks who are currently spring cleaning their homes for the coming Lunar New Year of the rabbit. The whole house churned out more "dust bunnies" than we could ever imagined!

We ended up spring cleaning even harder and throwing out more junk than we even remembered we had. Important stuff way back then but mostly for charity and the dumpster today.

We have been more than happy with our old laminate flooring. It was easy to maintain, not slippery, not cold to the touch as we can lay on it comfortably unlike laying on ceramic tiles where you can feel the coldness all the way in your bones.

Scratch, stain and high impact resistant. It was water resistant too but we pushed our luck too many times and had to deal with the consequence when we accidentally left our living room windows wide open at night before we went to sleep.

The rain at night blew into our living room and made puddles of water on the floor to slowly absorb in between the planks and damaged it. Rough ridges popped along the edges of the high compressed planks. The first incident was forgiving but by the third time, we learnt our lesson and had to pay for it... literally.

We love the feel of this type of flooring, so people may say we have not learnt our lesson still because we chose to install the same type of flooring again... yet, we have no regrets at all. We are ecstatically happy instead. We brought the resort living into our home now.

After almost a week of dust, a couple of days of putting back where everything was, throwing out the stuff we do not need anymore and six thousand dollars later, we have our home again. Phew!

We made it. The long weekend is coming... we will get to enjoy the two days public holiday and the weekend back to back!
Written by Muhd Imran at 11:31 pm No comments: 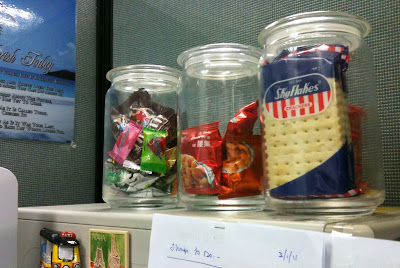 Woke up this morning as usual. It was another mid week like all weeks of the year.

Did my morning prayer and my workout on my home-gym as usual. True enough as usual, I extended my workout until the last minute to being late for work.

Yes. I was late to leave home... but the workout was great!
I thought I was able to catch the last bus to work before I was officially late to arrive. I opted for the cab when the "ShowNearBy" on my iPhone showed the next bus was 6 minutes later... I had missed my last bus and I was going late. My bad.

Well, you win on the workout and lose the money for the cab fare; a ten fold more expensive than the S$1.33 bus fare to work.

I got a cab less than a minute after standing and flagging for one near the bus stop bay. It was the white, Singapore Gas Company cab. I could see the driver inside as the cab approached me. He was an old man with sparse, white hair... in his early seventies, was my guess.

"Good morning, Sir." He quipped cheerfully as I was getting into the cab. He turned back and made sure he made eye contact with me.

I reciprocated his good intentions and told him my destination. As I continued telling him my preferred route to work, his left hand stretched over and back of the front passenger seat, holding a couple of sweets in pink and green wrapper each.

Wow! That was nice of him as thought to myself. Maybe it is nearing Chinese Lunar New Year, so such gifts are custom to him. In modern Singapore, old folks still stick to their customs... not so sure about the younger generations though, regardless from any race or creed. Being a cosmopolitan society has its downsides too, nevertheless.

"Thank you." I replied. Obligingly took the sweets from his hand, "That's nice."

The journey was pleasant enough. The old uncle kept quiet and gave me my time to enjoy the journey. The rush hour was not as painful because my preferred route avoided most of the traffic jams that one would expect in the morning.

Pleasant enough that along the whole route, I could count flocks of egrets, gracefully frolicking in the open fields along Tampines and Sengkang.

There were forty-seven of them in total I counted, plus or minus a few. My favourite thing to do when I had to take the cab to work. Of course these graceful birds are from as far as Siberia. Escaping the winter months there for sunny Singapore. So such bird-spotting-while-commuting hobby of mine is subject to the seasons.

I arrived five minutes after eight. Paid the metered fare and made a point to bid the cab driver a nice day first in return.

"You have a good day too... thank you." He replied. Making eye contact and smiled. Such a pleasant old man. He made today, a good day for me regardless of the craziness that I was expecting at work. 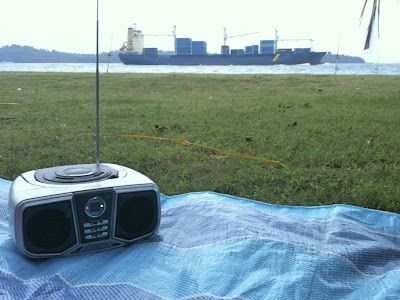 I sat alone on the sofa watching the countdown to the new year on TV last night. Watching it alone was as thrilling as watching the clock ticking on the wall.

When the clock stroke twelve and the brilliant, eight-minute fireworks blasted in the skies over Marina Bay wowed everyone, witnessing the New Year celebrations alone created not even a spark in this living room. 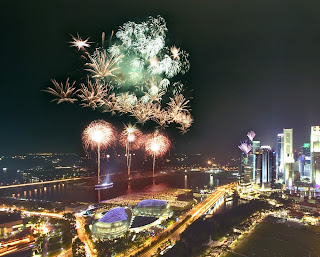 It is true. However wonderful it is, but if you cannot share it with the people you care or love, it does not really amount to anything.

Wifey was fast asleep in the bedroom. She is not a late "nighter." Lack of sleep is her kryptonite. She turned it just before eleven claiming "my eyes are not willing to cooperate!"

So too was Sonny. He can pull an "all-nighter" but was soundly in dreamland since half past ten. Now that he has reverted back to his school-day sleeping time regime, the latest he is allowed to stay up late... only because of school projects or homework, is eleven o'clock. He had enough fun during his month-long December school holiday.

I switched from channel to channel but nothing interesting was on... on New Year! Well, probably most people are reveling out or in parties somewhere, so no reason for good shows to be aired to waste, I guess.

Last night was one of the most boring New Year celebration I had in recent memory. Even the little children were having a blast downstairs when I looked out the window and saw families in the courtyard garden playing sparklers and flashes from their cameras. 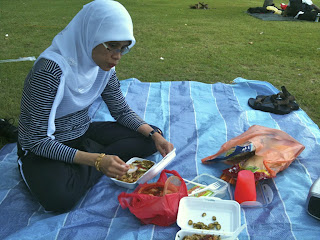 Reluctantly, I went to bed before the first hour of the New Year was up. Then again, I got woken-up several times by the passing revelers downstairs in the wee hours of the morning. Not at all an exciting start to 2011... my rant post 2011 countdown.

Woke up early this morning and did my morning prayers. I went back to sleep to wake up to a sunny new day, full of potential, I felt. I over to Wifey, still sweet in slumber land.

Looking out of the window, the sky was blue as the morning sun shone on my face. The birds were chirping... promising a beautiful day. I was happy and content.

The day turned out to be cloudy but hey, there I was having a picnic on the beach with Wifey. Wished Sonny could join us but I think he was having a blast at the New Year's barbecue with his classmates and teachers over in Simei. 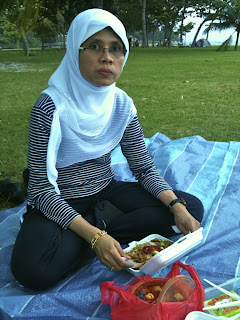 Wifey knows my simple pleasures... a day at the beach was all it took for me to be happy. Simple pleasures means, a packed meal consisting of Kampong fried rice and Tom Yam Soup, hot Teh Tarik and lots of snacks as we spent our time as a couple at Changi Beach Park. Our version of New Year celebrations of sorts.

Wifey and I talked about so many things... topics ranging from our childhood days to the latest happenings, like her trip with Sonny to Kuala Lumpur and Perak a few weeks ago, together with the entourage of her whole family of just over thirty people!

Listening to the CD she bought from her trip, Her latest favourite Lebanon artist who is very big in Malaysia currently.

We even installing Viber on our iPhones and testing the free online chats together. We stayed well into the evening and left just before half past nine!

Before we headed home, we took a stroll around the shops at Changi Village.

There I met an old army camp mate who just got off the boat from a day trip to Pulau Ubin. It had been more than ten years since we met! He was with his teenage son, both were holding a fishing rod each.

There too, I met my old neighbour, a childhood friend from the village. For the first time, I met him together with his wife and two children. 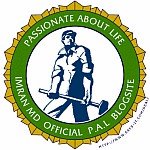